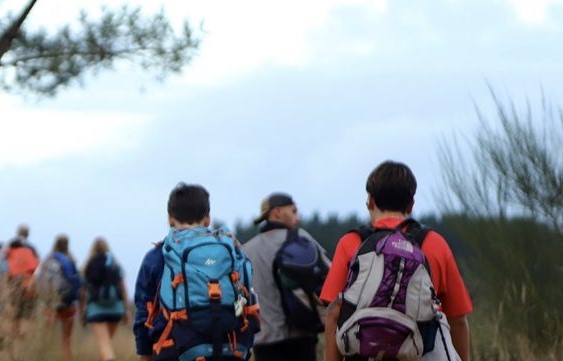 I have been kindly invited to write a few lines about the different facets – spirituality, community, apostolate – of my life as a Brother of the Sacred Heart; and so here I am, trying to give shape to thoughts that will respond to the invitation.

We are believers; we think and believe that God’s designs are guiding us along paths that He knows, while, of course, respecting the greatest gift we have: our freedom. Throughout the days and years, we live our lives without thinking too much about what God has in store for us. When crossroads arise, more or less unexpected, we choose God’s paths or our own preferences because He invites and proposes but lets us choose.

Perhaps my life as a Brother of the Sacred Heart began, without my knowing it, from the moment of my birth which was, so to speak, almost a miracle. It was 1936.  My parents lived in San Sebastian, which had been taken over by what has been called the Left, the Reds.  My father, a fervent Catholic, had a “Traditionalist Communion” membership card.  As a child I remember very well seeing that card. (Later, the group would be called “Requeté,” but my father no longer followed that path.)

He was also the director of the traditionalist newspaper, “La Constancia”; I think it was a weekly rather than a daily issue. I have tried to find copies of that newspaper as souvenirs, but I have not succeeded.

The Feast of the Assumption, August 15th, has always been celebrated in San Sebastian. However, at that time, such religious observances were suspended; and meetings among Catholics were quite similar to those held in the catacombs by the first Christians. After lunch that day, my father went to visit his mother-in-law (who would become my grandmother) while my mother stayed at home with my two brothers, ages four and one.

Soon after he left, four well-armed militiamen arrived at my house looking for my father. Not finding him after searching the entire house and confiscating everything that seemed right to them, they remained, waiting for my father to return. And that is when the “almost miracle” happened: my father did not return because a storm had arisen, accompanied by lightning, thunder, and heavy rain. My father waited at my grandmother’s gate for the storm to pass while the militia officers waited in my house. When the rain stopped, my father came home (my grandmother lived nearby). At the same time, the militia officers decided to leave. In my house there was an elevator; but it was used only for going up. While my father was going up in the elevator, the militia officers were descending the stairs. When my father entered the house, he found out that those who were looking for him — probably to “give him a ride” as it was called then — had just left; their voices could still be heard on the stairs. And so I was able to enter this world into a very Christian family, with fervent and committed parents, one year later, on August 23, 1937.

Ever since I was a very young child, I have lived the devotion to the Sacred Heart. Perhaps my first memories go back to when I was four or five years old. In my home, the Heart of Jesus was enthroned. As was the custom, a plaque on our door and on many others testified to the enthronement. In the main hall we had a classic statue, which still exists, of the Sacred Heart of Jesus sitting on a throne. Before dinner and after praying the rosary, we knelt before the statue and repeated an ejaculation, the second part of which I have not heard since then: “Sacred Heart, in You I trust, because I believe in your love for me.”

At the age of six, I enrolled at Sacred Heart School on Sánchez Toca Street; and quite naturally I met again the Sacred Heart, whose statue presided over the spacious entrance hall.  The statue had been damaged by bullets shot by the militia in September of 1936 when they left the school that they had occupied since July of that year. That statue is now in the chapel hall of Mundaiz.

In addition to my affection for the statue, I found myself attracted, since I was a child, to the “Offering of Our Works” that we prayed every morning, as well as to the first Fridays of the month, and to the Feast of the Sacred Heart, which included a procession in which the entire school participated. There was also devotion to Mary, with the celebration of the Eucharist on the first Saturday of the month and the singing of the “Salve” with all students gathered in the large hall every Saturday of the year.

When I was completing my courses in Párvulos, the day of my First Communion arrived. The teachers prepared us for a month, using Gospel scenes printed in full color on large cardboard sheets.  I remember in a special way the parable of the prodigal son. I think the sheets were printed in France; I found some identical cards when I began my formation in Renteria. For many years, they were hanging in the stairwells.  Since that first Communion, I have received many communions; perhaps I should be touching the heights of holiness, but I do not think so. Yet that daily presence of God has helped me to be able to say until now, “Here I am, Lord.”

I earlier mentioned unexpected crossroads. And now the first crossroads appear. At the age of nine, I was studying what was then called Ingreso. During the school year, the students were prepared to enter the Baccalaureate after an entrance exam, which consisted of dictation and a few arithmetic operations. Those who passed went on to the Baccalaureate, while those who did not had to re-take the exam in September.

Some students didn’t want to study for the Bachillerato, and they passed to a class called Commerce. Therefore, at the end of the course, the teacher asked each student to list their intention for the following year. Almost everyone indicated, “Bachiller;” some said, “Commerce,” and I, to the general surprise of the teacher, answered that I was going to the “Seminary.” I was so serious when I said it that when the day of the entrance exam arrived, I didn’t show up.

I didn’t worry about it too much. I suppose that the Director spoke with my mother, because I started the first year of high school without having taken the entrance exam, neither in June nor in September. No one asked me anything, nor did anyone tell me anything. I continued with my usual friends as if all was normal. My mother naturally wanted me to get my high school diploma at any cost. We left my entry to the Seminary for later, but I continued with my idea. Who could have put that idea in the head and will of a nine-year-old boy?

The second crossroads arrived: I was already completing my second year of high school. I was 11 years old; and the teacher of the class, Brother Prudencio, Brother Alberto Gonzalez’s name at that time, asked me if I would like to be a Brother. I told him that I was going to enter the Seminary. He spoke to me on several occasions about the life of the Brothers, the schools in America, the missions in Africa. He spoke to me of the “hundredfold” … and wouldn’t I like to try the Seminary in Renteria. I remember that I answered that I did not care; that what I wanted was to give myself to God so that later I could do good for others.

Although my mother was not very happy about it, with the understanding that I continue my high school studies, I left my recently begun summer vacation and my mother (of whom I was really fond since my father had died when I was six years old), and at the age of eleven I entered the formation house of Renteria on July 2, 1949. And, of course, there I found the Heart of Jesus of my eleven years. 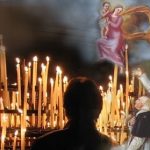