The Technical School and and High School San José is located in the Catholic mission of Lowanatom, on the island of Tanna, in the Vanuatu Archipelago. Once every three months, all the students participate, every year, in a spiritual retreat guided by their teachers and auxiliary staff.

The first retreat took place on April 6, at the end of Lent, just before Holy Week. For three hours, in the afternoon, we have been meditating, praying, and thinking about the main aspects of the passion and death of Jesus: the Last Supper, the agony on the Mount of Olives, the trial and death sentence, the Calvary’s path, the death of Jesus, and his burial.

Each class was one station of the Cross. After having interpreted the Gospel, we were distributed into reflection and prayer groups. That intense moment was followed by the sharing of each group’s ideas and concluded with a prayer and a song that started the next station. In this way we have made a tour in the most symbolic places of our campus, linking them with the meditation texts: The cafeteria (last Supper), the mango trees of the yard (Mount of Olives), the offices of the Headmaster (Palace of Anas and Pilate), the yard (Calvary’s path), the sand pile of the works (Mount Calvary), the dead tree uprooted by the PAM cyclone (the tomb).

All the participants lived this retreat with intensity, for it prepared them for the celebration of the Holy Week.

Four months later, on August 9, in the middle of the second quarter of the school year, and in preparation of the Assumption of MAry, we gathered to meditate on the texts of the New Testament where our Mother appears: the Annunciation, the birth in Bethlehem, the presentation in the Temple, the wedding of Cana, mount Calvary, the first Christian community. The students, led by their teachers, participated extensively in these moments of reflection and prayer. This allowed us to become aware of the presence of Mary, the first disciple, in the important moments of Jesus’ life and in the first Christian community, as well as of her maternal presence in the center of God’s people.

These pastoral activities, along with other similar ones, carried out in important moments and in liturgical celebrations, are an important complement for the human and Christian education in our school, and they are widely appreciated by the students. 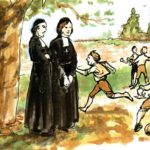 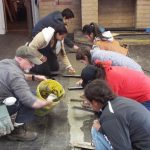 Solidarity across the Province and beyond USAUncategorized